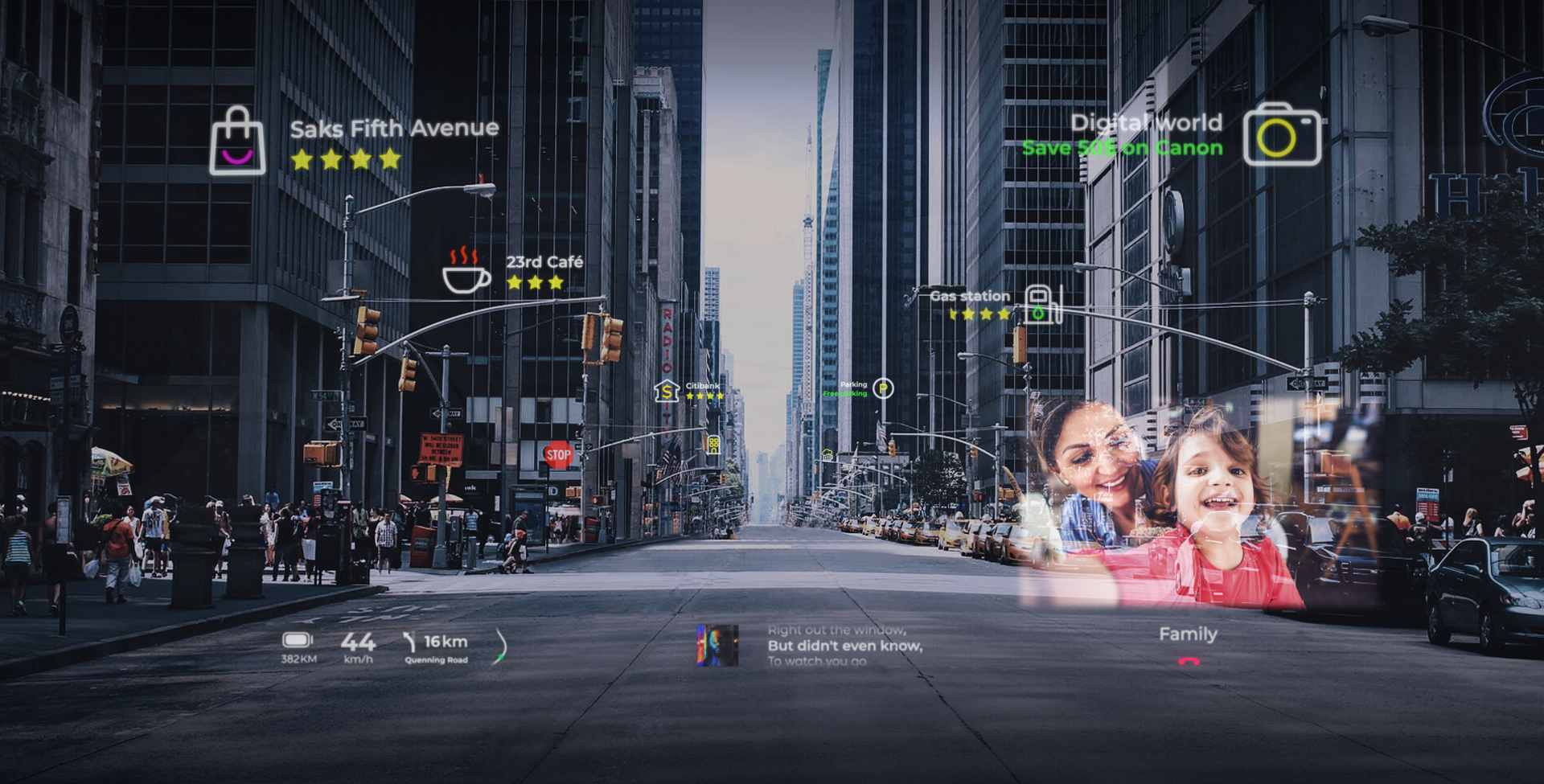 FUTURUS’s fourth-generation HUD displays essential information in front of a car’s windshield. The technology allows the driver to focus on driving and avoid car accidents. [Photo provided by chinadaily.com.cn]

On Nov 30, the Zhongguancun Administrative Committee visited the FUTURUS technology lab while accompanied by a China Daily reporter. The tech facility is known for developing outstanding Head-up Displays (HUD).

In the 2011 film Mission: Impossible - Ghost Protocol starring Tom Cruise, the protagonist Ethan Hunt drives a BMW i8 to track down the terrorist who stole a nuclear code.

In the movie, he relies on the HUD on the front windshield as he drives through crowds and obstacles in Mumbai at breakneck speeds, arriving at the terrorist hideout just in time. At the time of the Ghost Protocol’s release, the HUD in the movie impressed many moviegoers.

Over the past decade, the development of in-vehicle HUD has been lackluster. However, there is a Chinese technology company that is turning movie magic into reality.

While driving on a sunny day, the environment outside the car is usually quite bright, so the basic HUD cannot be seen clearly in most cases.

The Full Windshield Display in the FUTURUS sample car allows passengers in the car to see a transparent screen floating in the air through the windshield while the driver cannot see it.

With the popularization of HUD standard equipment among mainstream automakers such as BMW and Mercedes-Benz, the automotive HUD industry has reached an inflection point.

According to the GVR report, the HUD market will reach US$13.5 billion in 2025, and the automotive industry will become a significant contributor to the HUD market, ranging from luxury car brands to basic and mid-level ones.

Mainstream automakers around the world have recognized the HUD industry. FUTURUS has cooperated with BMW, Audi, FAW, SAIC, Great Wall, Ideal and other car manufacturers.

“Currently, we have received 1.5 billion orders and will provide HUD for more than 1 million cars in the next five years. Also, our HUD product line has covered all the needs of the auto industry for human-computer interaction technology from L1 to L4 stages of autonomous driving," Xu noted.

At present, the second-generation HUD product released by FUTURUS ? Smart HUD ? has been mass-produced.

This product's display size can reach 27 inches, and it can show a range of information, including the navigation path, cruise control details and vehicle diagnostic control. In addition to ADAS and adaptive cruise, it can also provide more auxiliary and entertainment information such as maps and music.

Speaking of his entrepreneurial journey, Xu, who graduated from Kuang Yaming Honors School of Nanjing University, recalled, “In 2001, Mr. Yang Zhenning came to the school to communicate with students in mathematics and science, and persuaded students doing basic scientific research to switch to applied science and engineering technology.

“The reason is that humans have been conducting basic scientific research for decades or even hundreds of years. In the 21st century, engineering technology is in dire need of top-notch scientists from the field of basic sciences to enhance human observation and experiment methods.

"I was young, and I didn’t understand why a top theoretical physicist like Yang Zhenning would persuade everyone to change careers. But, after working for many years, I understood his words.

“Scientists who study basic theories are not familiar with engineering, products and industries, while engineers can hardly make game-changing innovations due to the differences in their knowledge structure. It is only when the qualifications of engineers, scientists and entrepreneurs combine that one can make such innovations.”

Xu added that his company’s vision is to build Bell Labs in China. In principle, only basic innovation labs that don’t bear performance pressure can innovate continuously and maintain absolute leadership.

FUTURUS LAB has invented Holographic technology and Light Field AR Display technology and won four CES / CES Asia innovation awards. It is the product and technology supplier for BMW, SAIC and LEADING IDEAL, among other companies.

To better help develop high-tech enterprises, the Zhongguancun Administrative Committee will conduct research activities every two weeks to learn about the difficulties encountered by the enterprises and solve problems that are raised.